As of this writing, the trip is planned to take me to Key West, Vancouver, Newfoundland, and then back to Miami.

Like the last journey, this one will be a shoestring budget adventure, with ramen noodles, pbjs, tenting out, and couchsurfing all on the agenda. 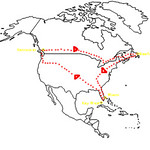 I grew up in Miami, FL, my folks still live there, and it is my default go-to when I haven’t elsewhere to go. I went to college in Gainesville, FL. Since my last trip, I finished a degree in Gainesville. I will be moving to Phoenix, AZ some time after the trip to continue school and start my social life over as I don’t know anyone there.
Life for me has been a mixed bag of living in austerity whilst working overtime to save for this journey, great joyful moments like graduating, being accepted into another school, achieving personal goals, and as well as devastating times.
I’d be lying if I said I hadn’t reconsidered going.

I am delaying the trip a week or two.
As much as possible given the circumstances, I hope to leave with a positive frame of mind. The long road is meditative for me, and often turns my mind into an echoing chamber that largely multiplies how I am already feeling.
A man called James Raynor, also a biker, once said “we are who we choose to be.” I choose to be a biker traveling across the sands of time.
Aside from this brief introduction to my personal life, I will endeavor as best I can to maintain this journal an exciting adventure log instead of a bleeding heart manifesto.

The project “Shadow-Engine” has been two years in the making. Very, very shortly after completing my last adventure I managed to spin a rod in the engine, originally evidenced by engine oil in the coolant and sparkles in the oil.

My mechanical guru, hereafter “Sarge”, debated with me for a long time what the best course of action would be: fixing it or buying a new engine. We foolishly decided to fix it, a mission that was deemed to have failed about a year ago. We split the case open, noted that it had been opened before and noted several troubling findings inside. Dozens of hours of work later we decided to cut or losses and buy another engine. We, foolishly once more, bought a used engine with a locked up transmission from a wrecked Shadow one year older and of a different trim. We did this in hopes of quickly being able to replace the broken transmission components from the old engine. A fully working engine was $1,000, this one was $500.

It was after receiving the engine at a faraway fedex freight warehouse that we realized we would, once again, have to split a shadow case to get any work done.

Gasket kits alone ran about $250. To say nothing of other expenses and the dozens and dozens of hours of frustration the ridiculously complex engine caused Sarge and my electrical guru, hereafter Ha-mes.

I learned valuable business lessons of biting off more than one can chew, Sarge and Ha-mes experienced the joys of unnecessarily complex honda engineering, and we all grew wiser.

In the end, for our efforts, we were rewarded with a ridiculously well running Shadow making every one of its 60 horses. The bike was back together about 6 weeks before the trip. 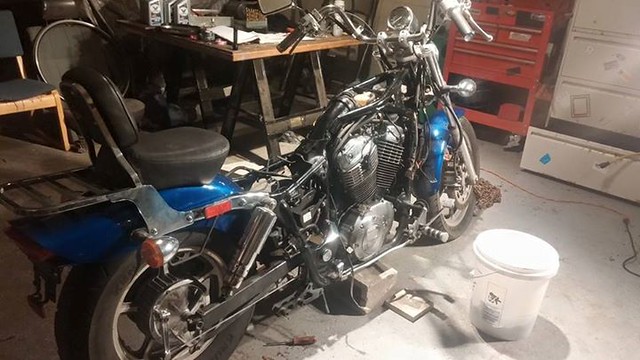 I wanted to make a writeup of some of the other preparations:

We had tires mounted at RideNow Powersports in Gainesville, FL. They will price match any of the big online stores AND install it for free. I’d like to take a moment here to thank Warren and Travis there for putting up with me calling to order $2 worth of parts over the phone a hundred times over the course of getting this bike roadworthy.

We rebuilt the front forks. (the seals were completely shot)

Ha-mes made and installed a female usb port so I could charge my phone. I’ve shown several people the little board where he soldered all the little electronic components to make it work, simply because I found it so fascinating.

They also got a tachometer installed, so that hopefully I don’t blow this engine as well.

Thermostat, gear oil, fuel filter were replaced. Cables were lubricated. Brake fluid topped off. Sarge scored me a humongous battery (the largest that would fit). Plus probably a dozen other little things that we did to it.

I’d really like to also take a moment, to, again, thank Sarge and Ha-mes for the ridiculous amount of time, work, and love that they put into getting this bike running as amazingly as it is. As well as for largely accepting arepas, pizzas, tools and other things I was getting rid of, (and very little cash) as payment.

The old windshield that was on the Shadow previously broke. We had another one lying around from a different bike, less any of the gear to mount it. We were originally planning to make something to mount it, to the point that Sarge and I were at home depot in Miami looking for hardware and metal. With no luck finding a used windshield and feeling uneasy about ghetto-rigging the windshield on, I bit the bullet and paid something like $130 for the proper mounting brackets for it. I bought them at Cycle Gear in North Miami Beach, FL. I’ve always bought gear there, particularly helmets and the like. They always have ridiculous sales on some stuff. Hopefully the brackets come in before the day I’m planning to start the trip.

I made the mistake of deciding on making metal saddlebag boxes. I have a very good friend in Miami who is a welder, and after talking to him for some time it seemed like a good idea. Unfortunately he decided on aluminum sheets that are much thicker than I probably really need, which cost me a small fortune. To add insult to injury, while a good guy, he’s among the flakiest of people I know. We went together to buy this metal something like last December. He still hasn’t finished them. Or started them. I’m very pessimistic that they will get done in time for my trip, and so it looks like I’ll be stuck bungee-cording a random assortment of sports bags to the bike as my storage solution.

Another struggle was the speedometer cable breaking in Gainesville shortly after we got the bike running. We ordered a new cable but it hadn’t arrived at RideNow before we had to leave for Miami. Fortunately I managed to get an old roomate to pick it up, as well as lucking out with an old buddy of mine being Miami bound from Gainesville being able to bring it down for me. Oddly enough, the “cable assembly” came without a screw necessary to attach it to the bike. I hope I can score it from a motorcycle shop in Miami without having to wait for it to come in.

Originally I was supposed to get my worldly belongings down to just one trunk box of sentimental items plus whatever came on the motorcycle. Though I failed on this endeavor at its fullest extent, I made a lot of progress in getting rid of things, with only a few boxes left. Even if I didn’t quite get down to one box, the pile is nonetheless small enough to be proud of. I could get into a long winded philosophical rant on my view of burying oneself in “things” and my motivation for getting rid of almost everything, but I’ll save that for a later entry. 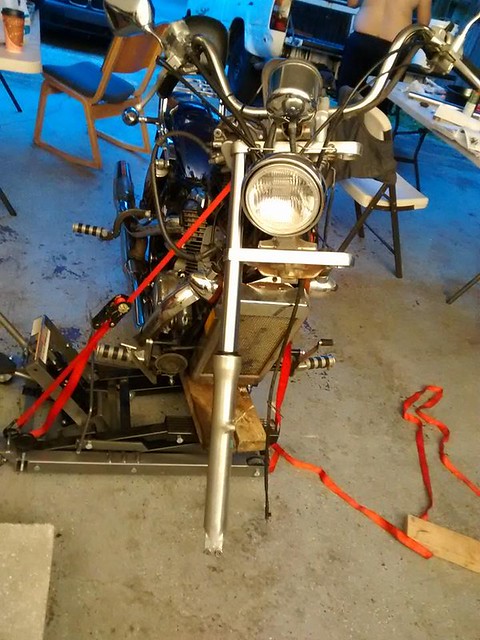